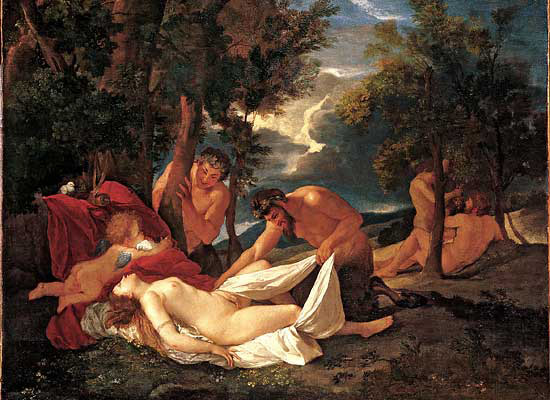 NYMPH AND SATYR by Nicolas Poussin

Bob Kessel has created an art series titled, “MYTHOLOGY”. It features pictures based on the works of famous artists throughout history like the picture “NYMPH AND SATYR” originally by Poussin, shown above. These pictures are available as signed and numbered limited edition fine art prints. Contact Bob Kessel for pricing and availability.

Nicolas Poussin (1594 – 1665) was a French painter in the classical style. His work serves as an alternative to the dominant Baroque style of the 17th century.

Initially, Poussin’s genius was recognized only by small circles of collectors. (In the two decades following his death, a particularly large collection of his works was amassed by Louis XIV.) At the same time, it was recognized that he had contributed a new theme of “classical severity” to French art.

Benjamin West, an American painter of the 18th century who worked in Britain, based his canvas of the death of General Wolfe at Quebec on Poussin’s example. As a result, the image is one in which each character gazes with appropriate seriousness on Wolfe’s death after securing British domination of North America.

Jacques-Louis David resurrected a style already known as “Poussinesque” during the French Revolution in part because the leaders of the Revolution looked to replace the frivolity and oppression of the court with Republican severity and civic-mindedness, most obvious in David’s dramatic canvas of Brutus receiving the bodies of his sons, sacrificed to his own principles, and the famous death of Marat.

Throughout the 19th century, Poussin, available to the ordinary person’s gaze because the Revolution had opened the collections of the Louvre, was inspirational for thoughtful and self-reflexive artists who pondered their own work methods, notably Cézanne, who strove to “recreate Poussin after nature”, and the Post-Impressionists. The less thoughtful enjoyed the eroticism of some of Poussin’s classicizing subjects.

In the twentieth century art critics have suggested that the “analytic Cubist” experiments of Pablo Picasso and Georges Braque were founded upon Poussin’s example.

The most famous 20th-century scholar of Poussin was the Englishman Anthony Blunt, Keeper of the Queen’s Pictures, who in 1979 was disgraced by revelations of his complicity with Soviet intelligence.

Today, Poussin’s paintings at the Louvre reside in a gallery dedicated to him.