It may be this love is a debt I am paying,
due to the destiny of my line,
and that Aphrodite is exacting a tribute of me for all my race.
Europa – this is the first beginning of our line – was loved of Zeus;
a bull’s form disguised the god,
Pasiphaë, my mother, a victim of the deluded bull,
brought forth in travail her reproach and burden. 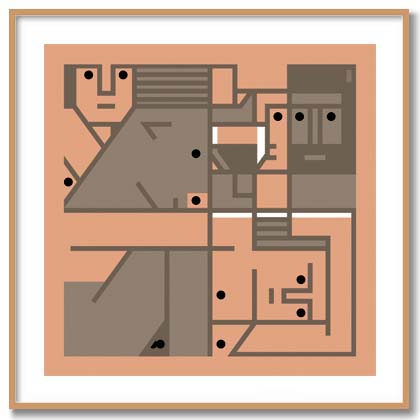 MINOTAUR AND GLASS OF WINE by Bob Kessel

Bob Kessel’s art series “PICASSO IN PARIS” features pictures based on the works of the Pablo Picasso. These pictures are available as signed and numbered limited edition original fine art prints. Contact Bob Kessel for pricing and availability. 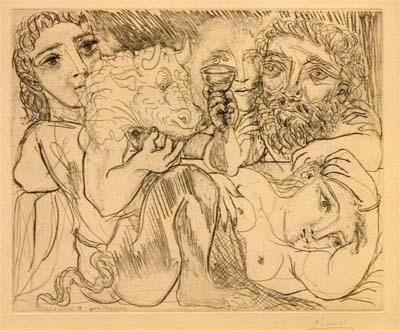 Art is a human development before it is an aesthetic phenomenon, and Pablo Picasso, the twentieth century metaphysician, autobiographically represents his world translated into a personal aesthetic expression. As a Spaniard it was inevitable that the bull, the bullfight, and eventually the Minotaur, would concern Picasso.

The Minotaur, half-man, half-bull, virile and noble, but ultimately monstrous. The Surrealists loved the Minotaur and his Labyrinth as a symbol of man’s convoluted mind and animal nature.

The Minotaur myth emerged in the arts: Matisse illustrated Henry de Montherland’s Pasiphaë: Chant de Minos; Max Ernst’s Labyrinth and his Wheel of the Sun both allude to this myth, while his Spanish Physician shows a woman flirtatiously dropping her hankerchief before a minotaur-like figure; Giorgio de Chirico made many versions of sleeping The Soothsayer’s Recompense surrounded by labyrinthine colonnades, arches, and facades; and Victor Brauner depicted a wide-awake Ariadne on conveyance that Ernst Trova could have built for his Falling Man; while Masson continued his variations on the Pasiphaë-Labyrinth-Minotaur idea often greatly influenced by Picasso.