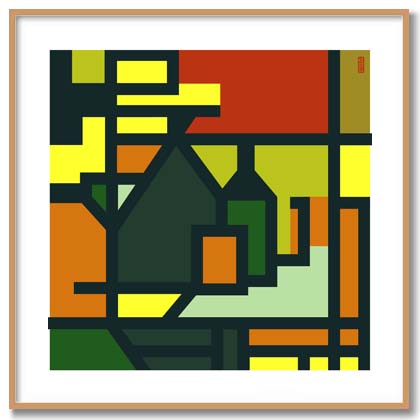 “NIGHT CAFE” by Bob Kessel, based on Vincent Van Gogh’s painting, can be purchased as a signed and numbered limited edition original fine art print. Contact Bob Kessel for prices and availability.

The Night Café in the Place Lamartine in Arles is one of Vincent van Gogh’s best known paintings from his Arles period. The work depicts the interior of the Café de la Gare, an all night tavern owned by Joseph-Michel Ginoux and his wife Marie. 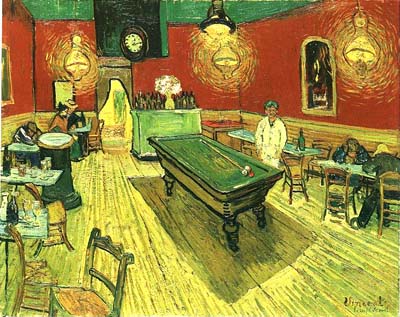 Van Gogh often visited brothels and disreputable drinking establishments. The desolate setting of the Café de la Gare served as an inspiration for Van Gogh who wrote of the painting to his brother, Theo:

In my picture of the “Night Café” I have tried to express the idea that the café is a place where one can ruin oneself, go mad or commit a crime. So I have tried to express, as it were, the powers of darkness in a low public house, by soft Louis XV green and malachite, contrasting with yellow-green and harsh blue-greens, and all this in an atmosphere like a devil’s furnace, of pale sulphur.

The subject matter conveys a sense of loneliness and desperation. The slouched drinkers and lone figure (the owner, Joseph-Michel Ginoux) behind the billiard table, along with the skewed perspective and stark colouring, create a jarring and disturbing work. Van Gogh himself compared the tone of the painting as delirium tremens in full swing (Letter 534).

As a general rule, Van Gogh only signed the works that he felt were the most well executed. In the lower right corner of this painting Van Gogh wrote “Vincent le café de nuit”.

Paul Gauguin, Van Gogh’s friend and fellow artist, would come to live with Vincent shortly after The Night Café was painted. In fact, Gauguin himself would paint his own version. The atmosphere of the two works is quite different. In Van Gogh’s version, one finds isolation and despair, while Gauguin’s is more lively with a focus on Madame Ginoux. Gauguin wrote to Emile Bernard about his painting: ” . . . a café that Vincent likes a lot and that I like less. At bottom it’s not my sort of thing and local low life doesn’t work for me. I like it well enough when others do it but it always makes me uneasy.” 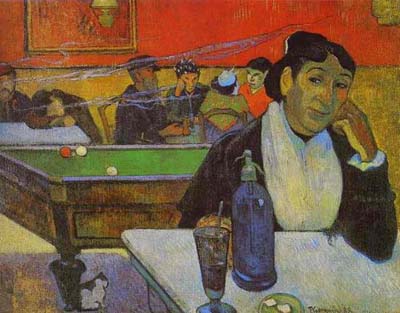