“DIAMOND JUPITER AND DANAE” by Bob Kessel, based on Peter Paul Rubens painting, can be purchased as a signed and numbered limited edition original fine art print. Contact Bob Kessel for prices and availability.

The god Jupiter saw Danae, loved her, and changing his form to a shower of gold, he shone into the apartment of the captive girl.

Perseus was the child of Jupiter and Danae. Acrisius, finding that his precautions had come to nought, and yet hardly daring to kill his own daughter and her young child, placed them both in a chest and sent the chest floating on the sea. It floated away and was finally entangled in the net of Dicte, a fisherman in the island of Seriphus. He brought them to his house and treated them kindly, and in the house of Dicte, Perseus grew up. Perseus returned to Argos and entered a discus throwing contest. His discus hit king Acrisius and killed him, thus completing the prophesy. 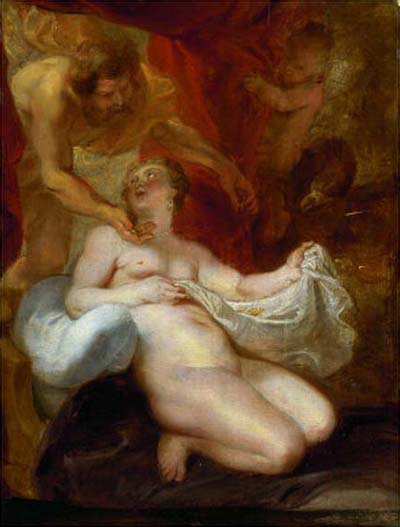