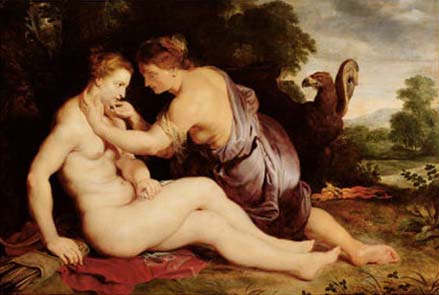 “DIAMOND JUPITER AND CALLISTO” by Bob Kessel, based on Peter Paul Rubens painting, can be purchased as a signed and numbered limited edition original fine art print. Contact Bob Kessel for prices and availability.

The Myth of Jupiter and Callisto

Callisto was a river nymph, descended from the river god Inachus. Callisto was the favorite companion of the goddess Diana. She accompanied Diana on the hunt and attended her at her bath after the hunt. One day the god Jupiter caught a glimpse of the beautiful Callisto and fell in love with her. Knowing that Diana had warned Callisto of the deceitful ways of men and gods, Jupiter disguised himself as Diana. In this disguise, Jupiter seduced the beautiful Callisto. Callisto listened lovingly to the beautiful seductive words of Jupiter, and, by Jupiter’s magic, she conceived a child. When Callisto’s pregnant condition was revealed to the virtuous Diana by jealous competitors for Diana’s attentions, Callisto was forced out of the company of Diana.

After a while Callisto had a boy named Arcas. When Jupiter’s wife, Juno, saw this evidence of Jupiter’s infidelity she became exteremely mad, and changed Callisto into a bear. Callisto was ashamed and afraid, and ran into the woods, and didn’t see Arcas for many years. One day, when Arcas was a young man, he decided to go hunting, and went into the woods where his mother Callisto, the bear, lived. Callisto saw her son, who she had not seen for many years. Forgetting she was a bear, she rushed forward to hug him. Arcas only saw a bear rushing toward him. He lifted his bow and let fly an arrow to the mark. At the last moment Jupiter got into the picture and threw Callisto and her son into the heavens as the constellations Ursa Major and Ursa Minor, the big and little bears, main parts of which are the Big Dipper and the Little Dipper. Arcas became the ancestor of the Arcadian race in the Peloponnesus.