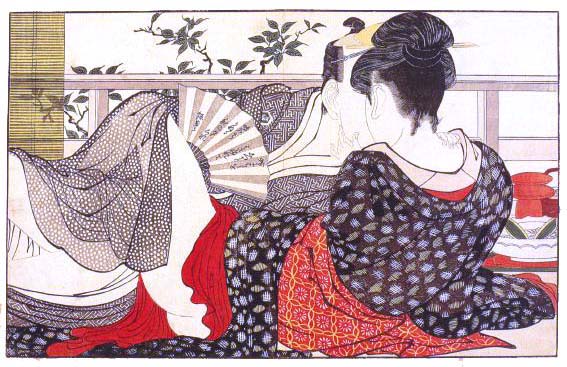 Kitagawa Utamaro (喜多川 歌麿, 1753 – 1806 was a Japanese printmaker and painter, who is considered one of the greatest artists of Japanese ukiyo-e woodblock prints. He is known especially for his masterfully composed studies of women, known as bijinga.

Utamaro produced over two thousand prints during his working career, along with a number of paintings, surimono, as well as many illustrated books, including over thirty shunga books, albums, and related publications.

His work reached Europe in the mid-nineteenth century, where it was very popular, enjoying particular acclaim in France. He influenced the European Impressionists, particularly with his use of partial views and his emphasis on light and shade. The reference to the “Japanese influence” among these artists often refers to the work of Utamaro.

SHUNGA by Bob Kessel after Utamaro 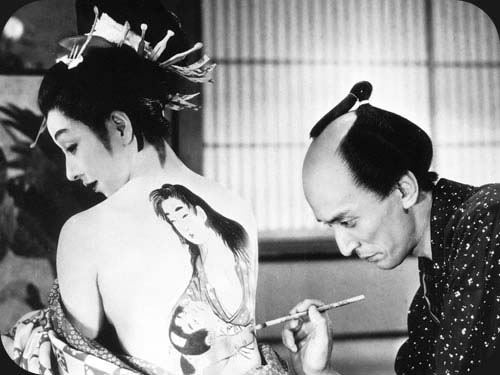 The most erotic and autobiographical of Mizoguchi’s films, UTAMARO AND HIS FIVE WOMEN is considered by many critics the crowning achievement of his middle period. It was a favourite of Susan Sontag, who frequently selected it for her Carte Blanche programmes. We could not include UTAMARO in our recent Mizoguchi retrospective because no decent print was then available, but a new 35mm print was struck just in time for these screenings. The film draws many parallels between Mizoguchi and the woodblock print artist who is its subject. (Both partook of the “floating world” of geishas, and both made their reputation with portraits of women.) Amidst the frenzied world of seventeenth-century Edo, with its sprawl of brothels and bars, the printmaker Utamaro patiently, painstakingly devotes himself to his art. The “five women” of the title are his models, including a courtesan (the great Kinuyo Tanaka) who kills her unfaithful lover. When Utamaro is arrested for outraging a local magistrate and is forbidden to draw for fifty days, art becomes, as it no doubt was for Mizoguchi, a matter of life and death. UTAMARO AND HIS FIVE WOMEN ranks with the most stirring of cinema’s classics about artistic creation. “If you want to know how we really treat what people like to call ‘the art form of our times,’ you may consider the case of one of that art form’s very greatest practitioners, the late Kenji Mizoguchi. . . . The film is, among other things, the exercise of an exceptionally active and intricate intelligence” (Roger Greenspun, The New York Times).

Mizoguchi’s regular scriptwriter Yoda, who worked with him (more precisely, for him) for 20 years, claimed in his memoirs that in the script for this film he was “almost unconsciously” drawing a portrait of Mizoguchi through Utamaro. The equation Utamaro=Mizoguchi has been irresistible to most critics as the two artists did have a lot in common. Both of them worked in a popular mass-produced medium operated by businessmen, and chafed under oppressive censorship regimes; both frequented the pleasure quarters and sought the company of geishas; but, most significantly, they both achieved fame for their portraits of women. In a highly charged scene in this film, Utamaro paints, directly on the back of a beautiful courtesan, a sketch that is later tattooed into her skin. One could say that this creative act (and the passion the artist displays in executing it) literalises the fact that both artists achieved fame on the backs of women – relying on them to arouse and express themselves, emotionally and aesthetically.

The five women of the title – the refined courtesan Tagasode, the fiery geisha Okita, the respectable artist’s daughter Yukie, the shy peasant girl Oran and the plain artisan Oshin – cover a range of feminine types and personalities but they are alike in two respects. They all actively pursue the object of their desire, however puny he may be. They also share a respect for the power of Utamaro to make them famous in life, if not posthumously, to render them eternally young and beautiful. (These women had in fact very brief careers. Under the ruthless system of exploitation that operated in the pleasure quarters, young bodies were required. In the rapid turnover of staffing, they would be soon discarded and replaced by younger women.)

The film exposes both their pathetic vanity and the brutal lust and voyeurism of the male artist – who is often one of their clients, and certainly a servant of the system that exploits them. In the two crucial scenes when Utamaro, who has been suffering from a creative block, is first turned on and then artistically inspired by the bare body of young Oran, Mizoguchi prefigures and extends (beyond the West) the thesis of John Berger and the whole feminist critique of the functioning of the female body in art.